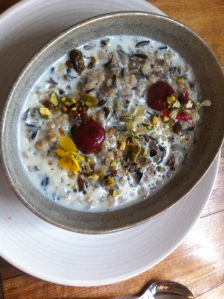 Last week I had brekkie at Auction Rooms with a friend of mine. I normally have the Shady Deal, or maybe muesli there, but that morning I opted for Auction Rooms’ three grain porridge with rhubarb (see the pic above). On the page, it sounded extremely similar to Di Bella’s five grain porridge with rhubarb. In realty it was quite different, with the porridge having a rice grain base and the rhubarb being a rhubarb coulis rather than Di Bella’s stewed stems. Di Bella’s was definitely a better interpretation of this idea, in my view. Auction Rooms’ texture was a bit odd and the edible flowers on top didn’t do much for me. I have no idea whose version came first, or if they even know about this shared menu item.

More importantly though, is that this porridge reminded me of a (very nerdy) interest of mine in the ownership of recipes and culinary ideas. Can you patent a cooking technique? Copyright a recipe? Can you own the intellectual property (IP) in porridge? I did look into this some time ago, when I was back at law school doing a subject called ‘Special Topics in IP’. Seeing those near identical menu descriptions (but quite different executions) reminded me of this interesting concept.

In Australia, I think recipes could meet the requirements of a literary work for copyright purposes. But what does that give you? You write a great recipe. Someone can’t then go and reprint that exact recipe in their cookbook and make lots of money. But what’s to stop them taking your recipe and making it in their restaurant, cashing in on your work in that way instead? Even if that was protected, could you prove it? Do you care if they do it?

Cookbooks have existed since at least the thirteenth century apparently, so there must have been a fair bit of appropriation and outright copying over that time. I mean, there are only so many ways you can make a lemon tart or spaghetti Bolognese. Then there is the question of when something becomes different or original enough to make it your own, for you to be the author or ‘owner’ of it, both legally and/or in the culinary world. If you take someone else’s lemon tart recipe and add ouzo, or a coconut crust, is it then yours?

The same questions, of course, have been debated for a lot longer in the art world. And food can be a type of art form, I think. I know a few art fans (my mum included) who might scoff in horror at that suggestion. I’m not saying my strawberry cupcakes are up there with Monet’s waterlilies. But some of the plates I ate at Attica or Vue de Monde encompassed a true appreciation of colour, line, composition and texture. They were thoughtful, carefully constructed by creative people, sometimes amusing, always surprising. That’s art, isn’t it?

Some things I have read on this suggest there is a sort of unofficial ‘honour code’ between chefs who attribute the source or inspiration of recipes in their own cookbooks. Chefs who break these rules and blatantly rip off others’ recipes in their restaurants or cookbooks are shunned, gossiped about and chefs stop sharing or working with them. In a world based on apprenticeships and collaboration, I guess that would be quite effective.

It’s something I have kept in mind in my own handwritten recipe book, where I write down recipes I make regularly. Some are what I would call ‘family recipes’ perhaps original enough to be our own, but many are taken straight from cookbooks. For those I try to write down the source and note any changes to the recipe I make. I know it’s a bit arrogant of me, but I do that in case I ever wanted to publish a cookbook. With these notes I could attribute properly, noting my own innovations along the way.

Is that crazy? I don’t know. I guess it’s partly the lawyer in me. But as chefs push the boundaries on cooking, they innovate with new techniques and the cult of the celebrity chef grows, I think we are going to see a lot more lawyers weighing into the culinary world (and I don’t just mean at their usual table at Bistro Vue!).